Currency Symbols: From EURO to Pound All Money Icons

There are a number of currency symbols used around the globe. Some symbols are more common, while others are used less frequently. The first currency symbol was used for Ancient Greek coinage. 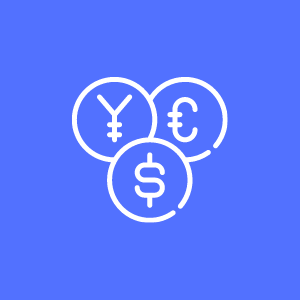 This article takes a look at the history of currency symbols and also provides a list of the most commonly used symbols today.

When sending or receiving money in a foreign country, it’s important to know which currency icon to use.

For Australians that might mean how do you put your dollar sign, because that is a crazy thing! In the U.S., how about the $ vs. {dollar} vs. $ tax issues?

The history of currency is fascinating to say the least. Everywhere you look, there are coins and bills, which isn't surprising considering nearly everything we buy in our world uses money.

In one way or another, currencies are used to facilitate transactions of all kinds; from food, to clothing, to cars, houses and more.

Today's "money" is still very much based on the same concepts and rules that were established thousands of years ago when the first coins were minted from precious metals.

Currency is a system of money that is used as a means of exchange. Currencies can be classified into two monetary systems: the commodity money and fiat money.

The most commonly used currency that we know today is recognized by every individual around the globe – US Dollar.

There are many more currencies that are used around the world like Euro, British Pound, Indian Rupee, Chinese RMB, Japanese Yen and so on.

How Many Currencies Are There in the World

There are over 180 national currencies in the world.

The first nation to adopt paper money was Sweden in 1661 and recently Bitcoin has been kicking around.

I guess it’s fair to say that most people aren’t too knowledgeable about currencies across the globe.

Today, I want to take you on a journey around the world of currencies and show you just how many there really are! If you think you know everything about the dollar bill, think again!

Currency in the United Kingdom, sometimes known as Pound Sterling (GBP), is made up of 100 pence. The currency is jointly managed by the Bank of England and the UK Treasury. Commonly used banknotes are £5, £10, £20, £50 and £100 denominations.

Russia's currency is the Russian ruble. Russia is a semi-presidential republic with a functioning market economy, and has implemented or adopted a market economy for all practical purposes.

The ISO code of the currency is CHF. It is denoted by the code of CHF and the currency symbol is «fr». The country’s central bank is known as the Bank of Switzerland.

The bank was established in 1891, though earlier attempts were made in 1850 and 1870. Its current headquarters is called the Federal Palace. It has a long tradition of being one of the most stable currencies in Europe.

The currency of Hungary is the Hungarian forint (abbreviated as HUF or Ft, Hungarian pronunciation: [ˈhuf] listen ), often signified as HUF to minimize potential confusion with other currencies. It is divided into 100 fillér (f). Since the start of 2001 the forint's exchange rate was pegged to the euro; prior to that it had been pegged to the German mark. In November 2008, an EUR/HUF rate of less than 250% was established.

Denmark was officially part of the Scandinavian Monetary Union, a monetary union established in 1873 by Sweden, Norway, Denmark and the handling for Finland until it declared independence in 1917. The Danish kroner currency was tied to gold in 1875, replacing the rigsdaler. Legal tender followed from 1875.

Polish zloty (pronounced [ˈzwɔɫt͡s], listen) is the currency of Poland. The plural form in English is usually zlotys, although the official form is złoty, without the letter 'i' at the end (Polish orthography uses an "i" in the ending only when it is followed by another vowel). It is subdivided into 100 groszy (singular: grosz or groschen).

There are approximately 5,330.9 billion South African rands in circulation at a rate of ZAR12.50 to the US dollar. The values of the notes range from ZAR1 to ZAR500 rands. It's common for tourists that come to South Africa to ask which is the best note to have and which is the easiest to break when shopping.

Brazil is the largest country in South America with an estimated population of about 190 million people in 2014. The official language is Portuguese and the national currency is Brazilian Reals which is abbreviated as BRL. There are two types of banknotes, cruzeiro and real.

It is a sign of lower purchasing power than in the United States or Canada, but it also makes it quite affordable to visit the South American paradise. The exchange rate for one US dollar is generally 2,000 pesos, and it’s still quite cheap to travel around the country.

Mexico has its own currency. Unlike the United States, Canada, and other countries in North America, Mexico uses its own monetary currency that you will need to understand prior to travelling. Learn about Mexican Pesos today!

The Canadian dollar is one of the most traded currencies in the world and is used on a daily basis by most people around the globe. While it has its ups and downs similar to every other currency, Canada's financial system has remained stable overall, allowing people to use the Canadian dollar with peace of mind.

The international trading and payment methods were regulated by the government. In The late 1970s, with the permission of China, China currency was changed deeply to reform the financial system. From Deng Xiaoping’s reform and opening up, China has implemented a series of monetary rules. It has gradually pushed forward on the reform of foreign exchange regulations.

The current Japanese currency is the Yen. From 2003-2006, the Yen was tied to the U.S. dollar though it has been declining in strength steadily over the last decade.

In 2012, Japan experienced a black swan event following an earthquake and tsunami causing severe damage to the Fukushima nuclear power plant causing a nuclear meltdown that lasted three whole days. The effects of this disaster are still felt until today, not only on Japan’s economy but also in its social and political arenas

Cryptocurrencies have garnered a lot of attention in the past year, and with good reason. This new form of digital money allows you to send payments across the Internet without needing a bank or some other authority to confirm the transaction. Any two people can make a peer-to-peer transaction by exchanging these cryptographically signed tokens, and there’s no need for a trusted third party to be involved.

Bitcoin is a digital currency. If I had to explain to you what a “digital currency” was, it would require a post completely dedicated to that. In short, it’s the concept of using a mathematical apparatus for keeping track of your possessions, or in this case, your Bitcoins.

Ethereum is a very popular cryptocurrency that has been rising throughout the years and is now placed in second position after Bitcoin. It is used to operate decentralized applications and also supports the launching of new crypto coins. The great technology behind Ethereum has made it a more known cryptocurrency compared to others.

It was a fork of the Bitcoin Core client, differing primarily by having a decreased block generation time (2.5 minutes), increased maximum number of coins, different hashing algorithm (scrypt, instead of SHA-256), and a slightly modified GUI.

Dogecoin has taken the internet by storm and caused a bunch of people to question why it should be taken seriously. People have sent dogecoins to each other for fun, exchanged them for goods, and even used them to raise money for charity.

However, they don’t seem to want to be taken too seriously as some of the currency’s developers still use phrases like ‘to the moon!’ in their communication.