LBS to KG: Convert Your Weight From Pounds to Kilograms

This is a tool that converts the weight in pounds to kg. It is useful for cooking, since cooking recipes usually contain tablespoons and cups instead of grams and kg. This converter will help you quickly convert weights between these two units. 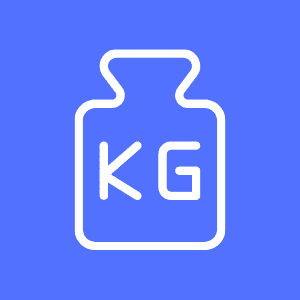 When I was in school, I had many teachers that impressed upon me how important learning math is. These were good teachers. They probably helped millions of students like me during their lifetime.

However, not all these brilliant math teachers know how to use the internet. One day I needed to convert a certain amount of pounds into kilograms, and I've done it multiple times without looking it up on the web.

If you are following a diet to lose weight, then it helps when you know how many pounds there are in kilograms.

While the formula for converting is simple, it can be confusing to those who have not performed pound to kilogram conversions frequently. The tool I show you above will help you to convert easily.

Have you ever wanted to convert pounds to kg, and then stopped yourself from building the calculation in excel because you knew it would take you forever?

I had this problem myself. Either that or I forgot what the answer was after I got distracted with cat videos on the internet.

But The tool I built will solve your problem in a second.

What is Difference Between Pound and Kilogram

You might have had a situation where you have seen both pound and kilogram on the weight of grocery items. To many people this might seem like an interchangeable system but it is not.

Pound is one unit of measurement while kilogram is another.

While they are different units of weight, they do not mean equal amounts of weight.

The difference between pound and kilogram is not just in their name but also in their weight.

To make you understand between pound and kilogram then I think it is better to know the history of both these abbreviations than how they originated.

Pound is a unit of weight and it's equal to 453,59237 grams which is used in both American and British system.

Kilogram on the other hand is a SI unit and it is equal to 1 kilogram which is 1000 grams.

The original pound (~453 g) was a unit of mass used in some English speaking countries before the 20th century and is still often used to measure some quantities related to body weight.

A number of different definitions of the pound were in use, until they were unified in the UK by the Weights and Measures Act of 1976 which declared that there would be exactly 1045.6223704 avoirdupois pounds in one kilogram and that this would be called the International (or kilogram) pound in all countries of the world (apart from the USA and Liberia).

The pound weight, also known as the pound or "lb" for short, is not an official unit of mass in the International System of Units (SI).

Nonetheless, it has been used in relation to mass since the Middle Ages.

The most commonly encountered historical unit of mass derived from the English lb is the slug.

The international avoirdupois pound was made when a definite mass standard was instituted, and it is one of two units that are still defined by statute in the UK.

How the LBS to KG Converter Works

There are many explanations, tutorials and guides on the internet about LBS to KG conversion.

But I was unable to find any easy to follow and understand step by step explanation of basic principles behind LBS to KG conversion.

I will try to explain those principles with the help of easy-to-follow steps. As a result, This answer is not only helpful for people who want to learn how LBS to KG works, but also for novice users of this system.

The LBS(lbs) to KG (kilograms) Converter is a simple tool that will implement the conversion process. This converter can be used in the context of cooking and shipping.

In this instance, the step-by step procedure for converting LBS to KG is as follows: 1. First of all, we have to determine how much weight we want in KG, and this is equivalent to three decimal places.

I explained the principles in the previous section, but you don't need to know them. If you have a special interest, you can of course learn, but if you only want to learn the equivalent of the weight in kilograms, all you have to do is enter the amount and click the convert button.

If you encounter a software bug, I suggest you contact me. I would like to solve problems quickly.

You can view other no-code tools I have developed here.